Balancing the Absurd and the “Spiritual” 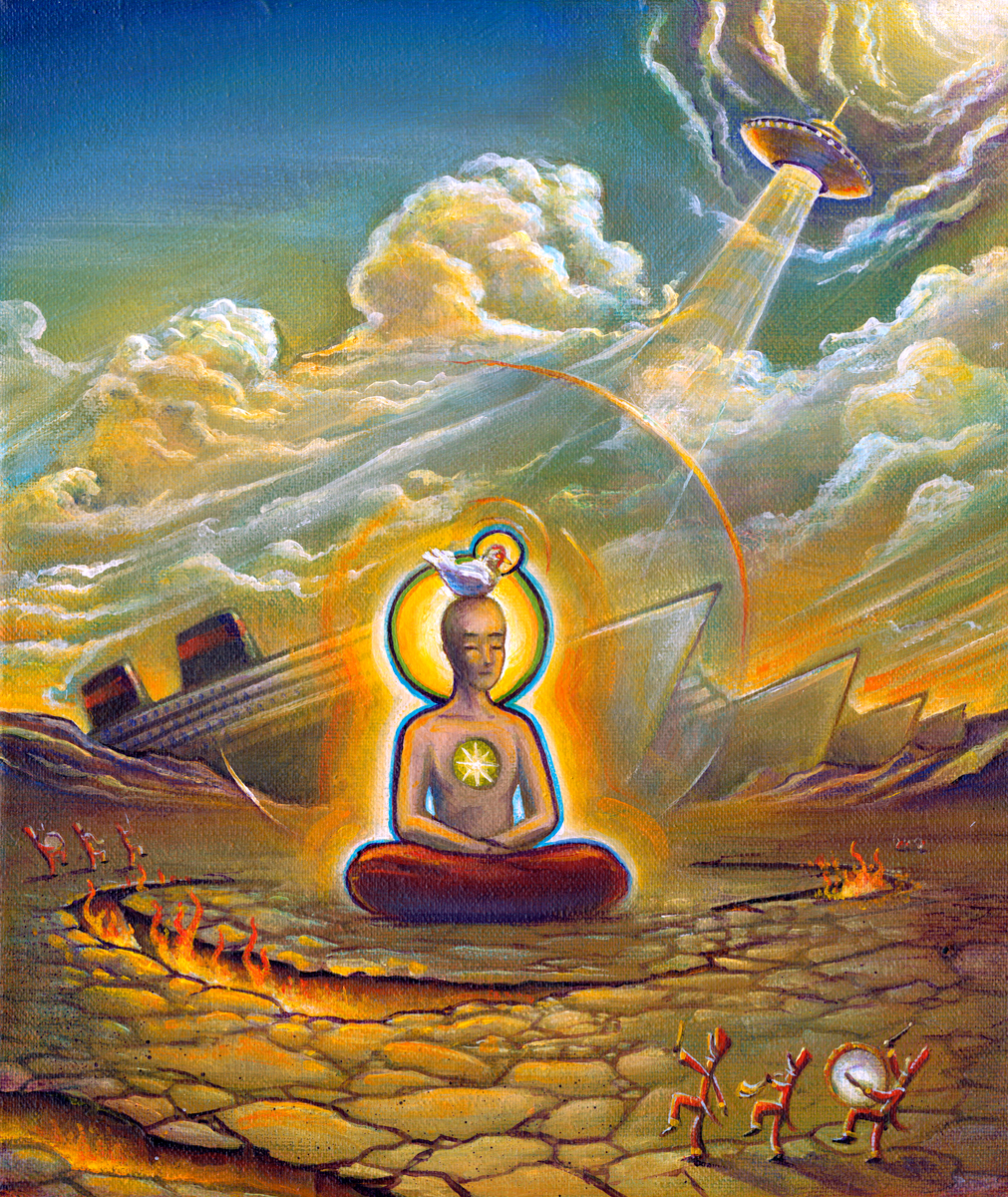 I think it a wondrous thing to paint the randomness as it arrives and kill of the self-editor that tries to squash our visions. However, I also think it is also a wonderful thing to be able to direct the vision and work with it – lead forwards without getting distracted by the swarming fetishes and the fireworks throwing cavalcade.  Hand in hand, you can allow it to lead you, the artist, to the highest point you can imagine. Every corner, each nuance, is a chance to pull the painting higher, deeper, and into more profoundly illuminating realms.

Let’s look at Dali’s work over the span of his life as a painter, as the psychoanalytical quality of his work from the 20’s and 30’s moved towards motifs inspired by science, religion, and the culture around him (while still of course being mixed with his own distinct style). One can see how he chose to start “free-associating” less and instead began to consciously use the tools he had, as well as the talent, vision, and momentum, to open up new worlds. His work however did retain those absurd and erotic qualities that were the hallmarks of early surrealist painting. His paintings also round off, so to speak, at their peaks with Christian motifs and images of Gala – she is always there, at the climax of each piece. In this way, I think, Dali could not break through his own mental constructions.

I feel that, in the time that followed the peak of Dali – in the daliances of psychedelic art that then matured into todays more spiritually minded vision – we can see elements this directed inner eye. However, I think that the work that I find most inspiring is that which seems to have a very grounded sense to it, that develops it’s darkness as much as it’s light – work that flirts with randomness and free association while maintaining a vision and clearly expanding on it.

In my own work, while there is, at times, a free associative quality about it, I try to push each angle, each curve, in the direction that is, in my opinion, the most illuminated of visions possible. This inevitably leads, I think, towards an art that is spiritual in nature. In the end, I am not interested in expressing the absurd or the more deeply erotic or the bizarre convolutions of my mind in my work. In the reveling in dark and depraved corners and neuroses, one can quickly get hypnotized, succumb to the ego reflections, and get lost in the sidelines. I want, in my art, to follow each piece to it’s highest possible outcome – in so much as I can pull that off anyhow.

This is not to say that all of that absurdity doesn’t arise in my mind. It’s all in there, writhing and forming and distracting. And this is not to say that there is no value there. There IS value in the sidelines. Every piece is just as important as the last. What I mean to say is: there ARE no sidelines. I think that a truly mindful life addresses all of the voices and desires in our beings. When we allow one desire to rise – the desire towards enlightenment, the desire towards health or wholeness or whatever, all the other desires arise as well, with the same gaping mouth. So how do we feed them? How do we nourish? They are all parts of the same I.

When I look the bizarre permutations of Dali’s work or the strange collages of Max Ernst I see the weirdness fully formed and explored down to every last minute detail. By allowing for this full exploration – by seeing it through to it’s end – they were able to then move further, deeper, and higher, into an art that was beyond anything anyone had seen before. You see, to run from that absurdity is to deny oneself something truly delicious in life for, within every mental construct that seems absurd – whether it be a needy little beetle or a flamingly erotic nipple – there is a deeper wisdom. Each piece is a doorway into the infinite and, therefor, each element asks to be explored.

However, like I said, I choose to follow a very direct path in my paintings, in lieu of the sometimes meandering surrealist approach which, more often than not, gets caught up in the weird. At the same time, I think it’s incredibly valuable to give time to that weirdness because that weirdness also needs space to grow and have it’s time in the sun. Every single piece of mental space is there for a reason and begs to be explored. As Dali said, “All roads are the path to God.”

I think this is an important thing for any artist to consider. how do we allow all of our other visions and voices to express themselves if we choose a singular path towards one aim? Look at it this way: the monk – he may choose to deny all forms of expression and in so doing allows for all things to exist on one plane of the mind. In that, no one aspect is given any more or less importance than any other. This leveling of the field is an important part of the process for nothing – neither the glorious effervescence of the dawn nor the uncomfortably unformed quality of the gutter mind is more or less valuable, more or less important, or more or less beautiful. The vastly observant mind simply observes and, in that, experiences a state of being that is sublimely balanced.

As someone who chose the path of the Artist, I give myself over to a certain proclivity and a very outward mode of expression (not to mention that I’ve chosen the life of the ‘layperson’ so to speak with all the attendant colorings). In that, as a creative force, I’ve done my best to carve out a pathway in my mind that allows for a freely flowing river of creative energy – of thoughts and emotions and feelings and inspirations and, above all, an openness to that which is not I.  It is a thing of beauty, that union.

Here is a painting that I did not create:

This is “Echo of a Scream” by David Alfaro Siqueiros. It’s a harsh painting, for sure. I probably wouldn’t paint it, even if I thought it. Instead I choose to paint things that, while they have their grounded corners and their moment of darkness, tend very much towards a sense of what one might call a lightness. People look at what I may have painted and see this body of work that I’ve created with what feels, to me at least, like it has an over-arching narrative of some sort of divine momentum. Where is the absurd, the erotic, the surreal that may exist with my own mind? If this is what the artist is coming up with, he must meditate all the time and only do yoga and probably subsists on some kind of purified vegan diet! (all of which is hardly true)

As I said, if we give permission for one torrent from within us to flow unfettered, so too will all other rivers want to rage. While discipline may be worthwhile to exercise over some and, at that, perhaps it is simply best to nip things things in the bud or, better yet, yank them out by their roots, it is worthy of consideration that we should perhaps give some mediated outlets to others. It is as if we strain to allow one ocean to pass while holding back another which we judge to be of a purer intention. Painting is such a visceral thing and it asks much of the artist.

And so, for me, those various other corners are explored through writing. The written word can express an idea so clearly and completely in but a few lines that it is, I feel, a very efficient way to allow for the mental streams to find their way towards the river that leads to that most divine source that I can imagine. To fully form something on a canvas takes a considerable amount of time and I am inevitably going to consider the composition and if it even make sense with whatever I’m working on (the self-editor at work…). For my free associative mind, to throw ideas out on a page following some absurdist idea and allow it to be done and over with in the course of a few thousand words can be intensely efficient. I want only two things out of it – to lead even those thoughts to their most profound outcome and to create the space for that more sublime beauty that I want out of my painting.

All of these writings – pages and pages of them – that I’ve created over many years of late night meanderings, early morning typing, and random associative imagining, will perhaps one day be published one day and part of my grins at the thought but that’s not the intent of my writing them. Their intent is simply to give an outlet – to be an expression of one more aspect of this divine spirit which is life.