Conversation on a Train 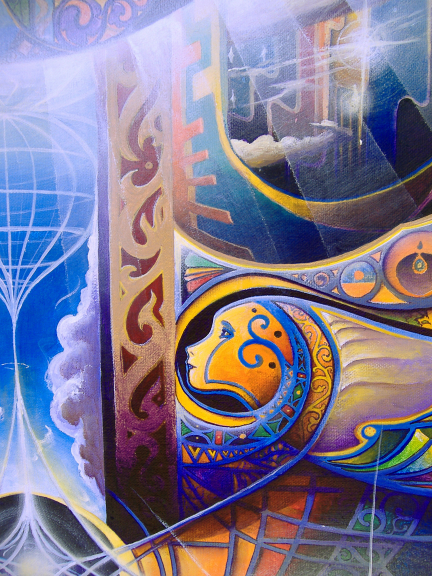 Not too long ago I boarded a very crowded train on its way to San Diego and sat down next to a young woman of 20 or 21 or so. We started talking. She was on her way to meet with her church group and that they would be going to Haiti to help build houses. I had this mental picture of a continually revolving door through which an army of volunteer workers had passed over the past year. Better to build homes than hand out solar-powered bibles (yes… a group did that).

In any case, she asked what I did and I showed her some of my work. Inspired, she steered the conversation towards the obvious spiritual components of the paintings, asking me many pointed questions about my background, my intentions, etc. None of it came off as judgmental – just curious. She was very interested in what seemed to her to be an obvious connection with spirit while not proclaiming any religion system.

Eventually it came around to: “Well, do you believe in heaven? Where do you think we go when we die?”

I thought about it for a moment. I grew up in a very traditional Roman Catholic family. We had a clear direction; the same direction she believed herself to be taking – Heaven, home of God the Father.

I replied, in so many words:

The truth is, no one really knows what comes after we die. We have many people who have told us many stories and those stories are all based on that particular cultures value systems and the perspective of the storyteller. We don’t have any actual tangible proof one way or another. It’s all part of our glorious imagination. People have these near death experiences – who is to say if it is fact or fiction? Imagination or concrete truth? I have had dreams that were so incredibly real and yet have also believed myself to be remembering something that didn’t happen as I remembered it. So It’s hard to say what is actually real.

It’s best, I think, to start from the here and now. Essentially, everyone just wants to be happy, healthy, maintain a sense of freedom. So hopefully we do things with our lives that nourish that in ourselves as well as others. You know: do unto others as you would have them do unto you. That sort of thing. In doing so, we create a certain momentum with our lives and our mental states.

Now, all of reality is perceived by our five senses in a certain way. We perceive a slice of it that our eyes and ears and tongues and so on all lock into place because that is the aspect that we experience and our brain, our conscious and subconscious mind, makes up stories around it. It’s the very visceral human experience. Of this vast sea of energy that exists around us, we perceive a very specific layer of it that we interact with. Our bodies too are a part of that perception. When we follow down the smaller and smaller workings of everything it is all very intricate and amazing. But we will always ever find the part that our senses and the extensions of those senses, can perceive. Everything else is supposition, story, extrapolation.

I really do believe there is a “spirit” of some sort or another – something that continues on after the physical body dies. It is whatever exists outside of – like an extension of – the physical body that we perceive. It is the momentum of our mortal life that propels this “spirit” onwards. The mental state of hell (and it exists most certainly) will propel one onwards into deeper layers of “hell” – whether it be flaming demons or reincarnations or levels of the underworld or whatever. It just continues. The same goes for the mental state of heaven. Then there is another mental state: just being, dissolving, continuously.

However, everyone, after death, I think, dissolved back into this ocean, moving along on their currents according to their momentum and, maybe, at some point, these currents surface again as bodies somewhere in some state of being, in this ocean of energy, should that momentum continue to propel it, like some current in the ocean.

So, she said to me when I was finished, do you believe in God?

I replied: If I were to call something “god”, I would call that vast ocean of energy “God”.

She thought about that for a moment and suggested that God was a specific being, somewhere, somehow, looking out for us.

But, I posited, that is to create separation. I am here, he is there. That sort of thing. There is just one vast ocean of energy that has neither beginning nor end. In the Gospel of Thomas (and I shared a bit about the Council of Nicea and how a specific story was desired to be told and other gospels were abandoned) Jesus is quoted as saying “Raise the stone and there you will find me; cleave the wood and there I am.” Link which is to say: God is in all things. God is in me. God is in you. God is in your finger. God is your fingernail. God is the dirt under it. God is everything. So, yes, you could say that I believe in “God”, that I believe in “Heaven” and that I believe in “Hell”. But I also believe that they are all constructs of our very vivid human imaginations and our somewhat more nebulous subconsciousness as it strives to create a sense of safety and identity.

The best thing to do, time and again, is to go back to that golden truth: Do unto others as you would have them do unto you. All beings simply desire to be happy. So the very best we can do is to help ourselves (since we would like that as well) and others to experience that. And the best way to do that is to continually examine our motives, our methods, our means, and push ourselves and our egos and our hearts and our minds in whatever method or way  presents itself towards further growth and ego-disolusionment.