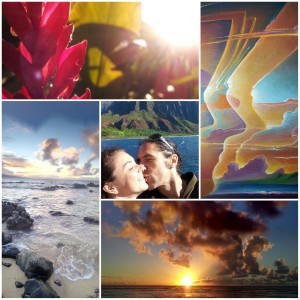 Returning to Hawaii 14 years later, Violet and I took a boat trip – time was short and the hike itself is long – around the north-western side up along Kalalau where I spent a month camping, being, and letting go 14 years ago in 2000 when I was 24. I’m a different person now yet, not so much as changed. Back then I’d hiked the Kalalau trail at least 8 times – once in only 3 hours. Had nearly had my neck crushed by the ocean, had been poisoned by the water, eaten a goat killed by a fellow camper and roasted over the fire, and then had retreated away from that larger transient community on that gorgeous beach. In a little hidden spot tucked away from everyone I lived in a tent alongside a river up in the valley. I dug a fire pit and had a sweet pool to swim in. I hiked, painted, got lost, found, sat, did yoga, grew my beard, mused and pondered and let myself disappear into the landscape.

“What made you come out?” asked Violet while we watched the sun cast sharp angles over the jagged edges of the cliffs.

“I was done, I suppose.” I replied. “Ready for a change…” And ready to see where I was at – who I was out in the world. You can only retreat so much. Humans are communal creatures and, ultimately, better suited to be of some service to each other. It behooves us, and our practice, to take part in the world at large.

At that time, after a few more weeks on Kauai (where I’d gone after spending four months on the Big Island), I went to Maui. I rented a room and puttered around, partied, hung out on beaches. Spent a lot of time drawing and drawing on all number of experiences, inner and outer. I was used to drifting onwards and eventually I drifted onwards from Maui and away from Hawaii.

This time around, we went to Maui first where we spent a couple of weeks in Haiku in a space graciously provided by a dear friend. We painted and shared sweet, loving, creative space – Violet and I. It is so easy to get wrapped up in the busy-ness of life. To get pushed and pulled by greater currents and the world we take part in and in the currents of our own oceans – conscious and unconscious. This human world doesn’t always lend itself well to examination of those currents -driven and hectic as it can be. It doesn’t always lend itself in to those necessary and tender pauses.

On Maui, there was a sunrise over Haleakala, hikes and swimming in waterfalls, rain and flowers, gorgeous sunsets over the Pacific. So many of our travels take the two of us to places where we want to run and see and do everything – great architecture and ancient ruins – or there’s events and all sorts of people and faces and conversations. This was quieter and we struck out into the spaces between each other and in ourselves and in the sweetness of our surroundings.

Afterwards, we went to Kauai and snorkeled and hiked and swam and had lovely dinners and laughter and sweetness and rainbows – all of the things Kauai is – and all the gorgeous epicness I remembered it to be. And, to go with Violet, up the Na Pali coast where I’d been blessed to call home for a month and share with her what I thought – and still think – is one of the most beautiful places I have ever been was perfect.