Kentucky Rivers and the Mid-West 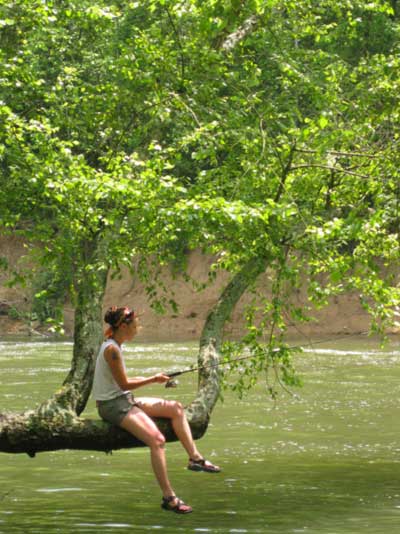 Driving through the mid west there isn’t much to look at. curving sloping fields segmented by barbed wire fences and oaks give way to neighborhoods, shops warehouses and billboards advertising Nostalgia-ville with it’s 50’s and 60’s icons – Elvis, I love lucy, Betty Boop and Scooby Doo – a time they hope to remember as simpler and more innocent. It’s never simpler and innocent. Only different. There were wars and torture and drugs and sex and crime and corporations bent on poisoning the populace in exchange for a hard-earned dollar from father knows best. After Nostalgia-ville, Winery billboards pop up, maybe every tenth billboard, advertising wines – non-organic and not too special. Then we end up back with green wooded areas and cornfields. Endless cornfields. Soon, in the distance, we’ll be in Kansas with it’s own endless horizon of green. For now, wherever we are – Illinois? Indiana? – has become nothing but woods surrounding us.

“The Move Over Law” – a rule we don’t have out in California but I can see the use for. However, I didn’t know about it until a police officer kindly chose to inform us of it on our way from Nashville, TN to Bonnaroo. I’d made it a long ways at that point – all the way from San Diego – without any hassles. Safe driving, usually over the speed limit (except in Arizona where the red light camera are waiting at, seemingly, every curve to pop you and send a ticket your way). In Little Rock, AR I picked up Violet perfectly on time, right as she landed at the airport. She’d had final exams to finish, was without much sleep and I drove us to Nashville where we found a hotel. The next day, after going grocery shopping at the Whole Foods and breakfast at the Waffle House (not an ideal choice) we were on our way to Bonnaroo, early Wednesday afternoon, perfectly according to plan.

I started noticing unmarked SUVs sitting every mile or so as we got closer to Manchester and we knew they were keeping an eye on all traffic. One pulled out as I passed him and I could feel him waiting for me to do something, anything. With out packed vehicle and California plates, we were a prime target. So we pass a pulled over police car searching someone and the lights go on. WTF? I say. I’d had the cruise control set to the speed limit so I wasn’t even a mile over.

The cop sidles up to the passenger door, tells us about the move over law and asks for some papers… So next thing I’m in back talking to the cop about how we don’t have that in CA and he’s asking about our business here – vending, art, etc – and what that’s all about.

No drugs? Guns? You’re not on probation?

And if I brought the dogs around they wouldn’t get anything?

Well, see we don’t mind if people smoke for personal use but we are looking for quantity – weight. People coming out as “vendors” and then selling drugs.

I don’t even smoke pot (which is true!)

Can you open the back of your vehicle?

So i pop open the back and he can see that it is packed full tight. Who the hell would want to search that? I happen to have some small prints accessible and show him. I’m sure his mind goes to some interesting places but we check out so he sends us off with a warming ticket. Cool. Nice. Very little hassle.

So that was a new law and we were sure to tell some of our friends who were on their way. And now, with this long drive homewards, we see the “move-over” sign often when entering a new state and we’re sure to get over.

When we left Bonnaroo there were no SUVs looking for anyone (tho we did see a few people getting heavily patted down) and we collapsed at a Comfort Inn just north of Nashville. The next morning (because bedtime was 6pm or something) we went downtown to get some work done. Downtown Nashville isn’t, in my humble opinion, much to speak about. It was also mad packed with the Country Music Awards which we didn’t [plan to stick around for. Good stuff for those who like it. Anyways, we both had some things to finish – me entering data and emails from Bonnaroo and Violet still had a lingering paper to finish. We sat at a Panera Cafe, had some lunch (salad) some green tea and worked.

Outside the sunny day quickly turned dark. We heard talk of tornado warnings. The dark sky turned a deep charcoal grey and rain came down in sheets. We decided that leaving soon wasn’t an option and waited it out. Waited a little longer and the whole thing passed by – no tornado in downtown Nashville that day but it was quite a storm. We got back on the road as soon as possible, heading north east to Campbellsville, KY, a little town in the middle of not a whole lot and home of Violet’s Dad and (somewhat) younger brother.

We spent the next few days canoeing, kayaking and watching movies. The first night we went out for some decent Mexican food and then spent the night (and the next few) at a (very) nearby motel. “Lucky Vista” motel. The vista however was warehouses that cut the view between the hills and the observer and the subtitle sign to the main sign said “American Owned” ” Country Charm”. As if being American Owned makes a difference. I don’t care much one way or another who owns a place – if the person is compassionate, kind, caring, generous and patient (and at least semi-intelligent), then they get my business. The Comfort Inn we’d just stayed at was run by a couple who was of Middle Eastern descent. The woman told us she was from Riverside, CA and had lived in Nashville for 6 years and her daughter loved it. They were as American as anyone else I’ve met. Just because homeboy has a southern drawl, a pick up truck, and a shock of blond hair that doesn’t make him any more or less American than so many others.

And I could never judge someone on their race – whether running a hotel or not. Like I said, their compassion outweighs their skin color by infinite amounts considering that skin color amounts to zero in my book and compassion and wisdom are just about everything. Las night we spent the night at a Best Western. It was the last choice since everywhere else was full. We’d ended up in southern Illinois looking for a place to spend the night. Everywhere we went – right off the highway anyhow – was full. Turns out there was a giant amusement park right there. Holiday World. For people who it doesn’t take much to entertain. Anyhow, we get there at like 12:30am and finally get a room (last one and this is the third hotel tried) and we get to our room (pretty comfy) and the neighboring room to our right is a family that is arguing itself to hell. CRAZY! So a phone call to the front desk and it doesn’t end. That’s what you get amping kids up on caffeine and sugar water – i mean – soda. It’s nuts but we wear earplugs. We wake to the same thing. NUTS! So As I’m checking out I’m sort of filing a complaint with the front desk. It’s two older ladies and they say they’ll need to talk to the manager.

The point of this story is that his skin is just as dark as the extremely nice couple who ran the Comfort Inn but he is telling me “What can you do?”. But we all know that if it were a bunch of partying kids, they would have been booted. But an arguing family? They should be booted too. Society shouldn’t be so accepting of such crude behavior. After some discussing and seeing that we won’t leave him alone, he tells the computer-inept front desk woman to give us a 10% discount. The point of this story is that, had he some compassion, he would have acted differently. Compassion is as non-skin color specific as being American or Indian or French.

That sense of compassion extends to Jarrod, Violet’s brother, recusing the dragon fly that had found itself drowning in the wide flowing river as we canoed downstream it. It’s wings fluttering, slowly drowning. We were in a canoe and a fair bit less maneuverable – at least for ourselves who aren’t super adept at watercraft. Jarrod, in his Kayak, paddled over and rescued the guy from the water. It was about 6 inches long and a beautiful yellow and black. Dragonflies had been landing on us and around us all day – buzzing through the air and tracing arcs and curves along the snaking Green River.

The river was pretty high for the time of the year but rain had been coming down off an on for days and now it’d cleared and the bright sunny day, big lazy clouds drifting overhead, and the multi-colored temperate rainforest of the Kentucky woodlands on either side of us. Occasionally we’d pass farmland or cows grazing or pass under some old rickety bridge but for the most part it was just us, gently avoiding the trees hanging over the water or the logs sticking up from below, startling great blue herons who would come swooping out of the trees and soar further upstream and hawks who would pass overhead. Dozens of little birds of various shades of brown and black, variously striped and the occasional cardinal would dart out over the churning water.

We came upon a thirty foot waterfall stretching along about twenty feet – in alternating sections of water, moss, and dangling vines dotted with pink and white flowers. We passed it by, a memory of the river. There wasn’t really stopping and once you’d passed it, on the river, there was no going back. The river flowed at a fair clip and it took a bit of effort to travel upstream.

Eventually, sun-kissed and satisfied, we reached our stopping point, where we’d left one car to shuttle us back to the beginning. The big oaks and sycamore dappled in sunlight – golden green and glowing – fluttered in the evening breeze and we drove back to the beginning, passing rolling Kentucky farmland, little houses and weathered red barns.