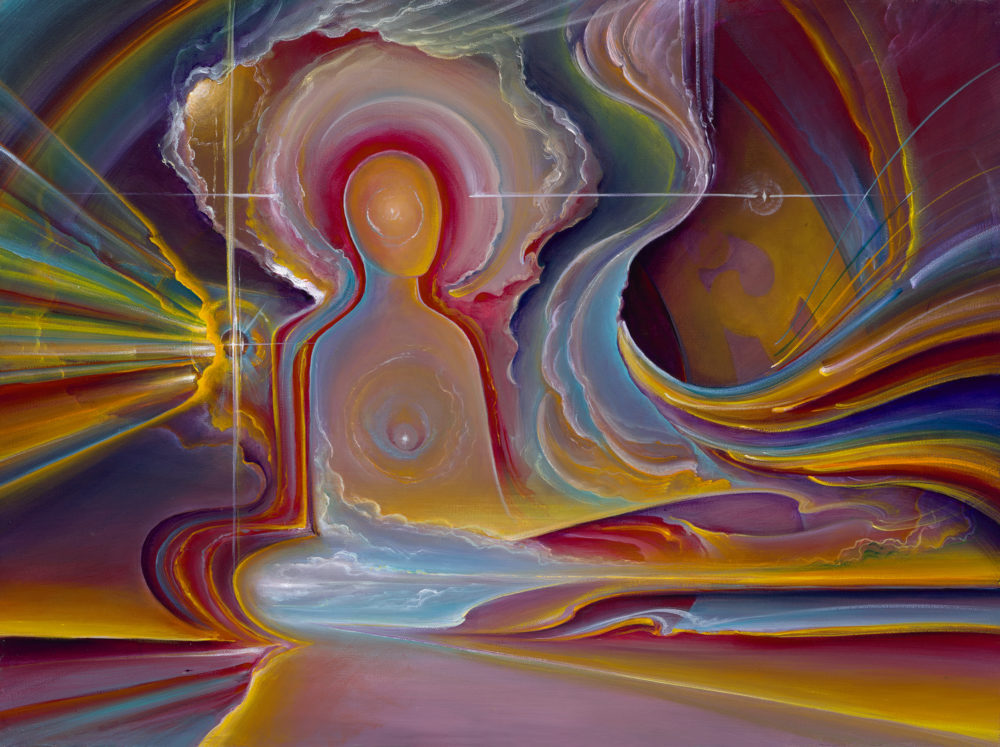 Sometimes, I’m painting and I’m just putting globs of paint onto the canvas, working it out as I go along blending it there rather than on my palate. I think to myself, “How could I really even begin to teach this? Who the hell wants to learn a process that can be so… messy!” It looks like a haphazard approach at times. The dollop of paint gets smeared onto the canvas along with several invisible dollops of faith in the process. All things considered, it usually works out, even when it doesn’t. So how does one teach that? Well, I look at my whole approach then not just the smearing of the glob of paint on the canvas. I have a clear idea of what I’m doing from the start usually. In the exact instance that I’m speaking of, I was working on the kid’s book that has been consuming all of my creative time. The kid’s book has a certain style and approach that I’ve used from the very beginning. Regardless of new ideas I’ve had in the past three and a half years about layering or glazing, I can’t apply them here because it would be inconsistent with the previous panels. I have to stick with the approach I’ve taken thus far in order to see it through. In some respects, this is a good bit of discipline. In the midst of this book that I’ve been working on for over three years, I’ve painted two great paintings and a handful of smaller but still important pieces. Those paintings have allowed me to express for a bit those thoughts and understandings about process – especially The Glass Onion with all of it’s underpainting and layering and such.

And then I come back to this image and right now there is a blue sky backdrop to grandly rolling clouds, a floating cliff topped with a buzz cut of green grass, and two people. I paint a field of blue. I throw on the green. I do this, I do that. But what is the approach, really?

First, I sketch on the basic image onto the canvas. In this case, we’re looking at something that has very distinct components – background, foreground, middle ground and a few objects within that space – people, things, etc. I never use carbon paper to transfer a pre-existing sketch. I always believe that if I sketched it once, I can sketch it again. And if I draw it onto the canvas, I know that I’ll paint over it and have to redo it. The after image is burned into the mind tho. I always have that. Also, I have come to see that a drawing has it’s own boundaries and, by redrawing it, I can push the boundaries a bit further. Besides, we always have to allow for spontaneity. So the canvas gets only a bare-boned sort of drawing. Note: the outline is done with an HB pencil, nothing softer. Softer pencils smudge and get in and leave lines under your paint. You don’t want that. Use an HB pencil. You’ll thank me.

Next, the drawing gets a light outline in paint so that with a few subsequent layers of background over it – it’s easier to get a solid clear blue sky for instance – I can still see my figures. I usually outline it with a combination of dioxanine purple, unbleached titanium white, and burnt sienna.

Then of course, the furthest back thing gets it’s color. In this case – it’s the sky. Now – this is the sky without the clouds first. We are BUILDING A WORLD here. First came the heavens. The sky goes on in a gradient that is, in this case, pthalo blue (green shade) and gesso (it softens the intensity of the blue). We’ll go over it twenty more times after this at least with bolder colors but for now the gesso provides a soft blue gradient of a background. The gradient of course goes from dark to light, top to bottom, respectively.

Look how creation sort of goes (from the big bang onwards to the sea of gas that was this planet..) First there was sky, then there was water, then there was rock, then there was growth upon it. Look at the giant peak of a craggy mountain – the giant rock was there first, then the seed settle upon it in it’s little craggy crevices. So first we create the mountain. Then we add crevices and cracks. Then we add the little bits of tree or grass or flower or waterfall where the landscape might allow for it (although we’ve been planning where those bits and pieces would go all along).

I paint clouds in along the way in the background – always churning and forming regardless of what is happening. They are, for the most part made up of titanium white, unbleached titanium white, pthalo blue, and dioxanine purple. I love getting lost in the clouds. On a day at the beach, I could look at the clouds forever. They are formless things always in a state of becoming – changing from one moment to the next, filled with seemingly infinite spirals and jetties.

Maybe, too I paint a big field of grass. I tend towards a grass that is a combination of deep turquoise and cadmium yellow with hints of burnt sienna or unbleached titanium white. Soft grasses with varying levels of green. By blending the green yourself, you can rock it now towards the blue, now towards the yellow, to your liking. I always paint it this way – rarely do I actually use a tube of any sort of green in my paintings.

Anyways, finally come the humans or the things or whatever is the main focus. I paint them in. I paint over things! O that! O that! Such is the nature of painting. None the less I usually have an idea of where things are going to be so I don’t spend too much time on something that is going to be painted over completely (remember that mapped out drawing underneath) but sometimes, it can’t be helped.

Maybe there is a person now with an orange robe. That’s when the paint just starts getting glopped on. The person gets a quick outline (or not, I usually just wing it) and I start layering that cadmium orange in great heaps over the lovely blue sky and the grass. It’s deadly! It just goes! It gets put on in great glops blending from yellow to orange to red and pops against the blue/green background.

Then it dries. I wait. I get back to it. I put in the shadowing, the gradients (everything is gradients, in various directions, one way or another) and eventually, everyone has form.

Then I sit with the details for a long long time. The devil is in the details, you know. I think that where you find yourself. It’s easy to throw lots of paint on to the canvas. It’s wonderful to lose ourselves in that and create big broad strokes. But to focus the mind, to bring ourselves down to the hairs width and understand that it really does make a difference – that takes a dedicated, loving patience. In that quality of focus we can get into the details and suss out the sense of a painting. It is there that magic lies, both in the painting and in yourself.