Category: On Traveling, On Nature 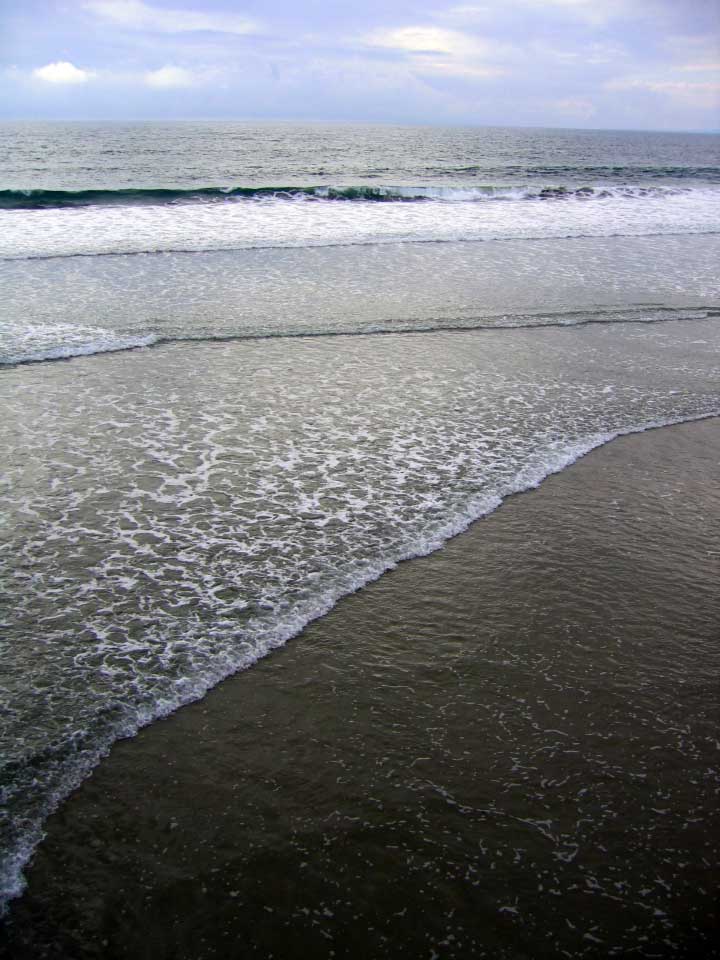 Pausing, resting, stopping for a moment is when I have a chance to notice the silhouette of the sandpiper standing on a rock, dark against the blue of the sky reflected in the tide pool. It is when I see the glowingly green stone almost hidden by the ripples of the water and catch a glimpse of a magenta bodied starfish  – its white dots like rows of little stars – clustered with three other starfish under an overhanging ledge of rock, peppered with barnacles. Some barnacles are the size of my big toe, others more the size of the nail of my little toe and the cliff hanging living – compact and confined, clustered tightly – blue lips of thousands of mussels. In the watery pools the anemone softly wave their blue green tendrils – a sort of fluorescent flower under the sea. Above the water, they have turned to gloppy blob like things speckled with the bits and pieces of broken shells and sand all clinging to them. When you see rocks stretching out in front of you with this blanket of shell particles it is not to be stepped upon. This is merely the pieced together shell of dozens of anemone, all clustered together, one after the other, in sprawling communities. Who am I to not want to also live in the sprawl? Perhaps sprawl is a natural occurrence. The only difference between the vast sprawling wasteland – I mean Irvine and Orange County – just northeast of me – and this is that this plays an integral part in the workings of a healthy ecosystem. Conversely, that spreading cancerous growth that is modern day living consumes and consumes and consumes in a seemingly never-ending power struggle and the waste? Plastic, toxins, runoff, etc… Garbage and poison. So. It’s the toxic nature of that sprawl that doesn’t excite me, the part that isn’t much like these rocks and pools and communities of sea life spreading out in front of me.

So I wander further down the beach, [picking up a shell and marveling at the intricate complexity of the lines of the rocks like giant shards poking up through the sand, rubbed and caressed into sinewy lines by years of ocean currents. Blues that merge into green that follow a line into a pool. In the pool is a rock with an orange glow and speckled with a pink coral sort of growth. The pink only glows when it is wet. If I take the rock home to admire it on my mantel, the pink will fade and I’ll be left with an orange rock and memory. So after admiring it for a while, turning it over in my hand and loving the way the sun through the water through the rock creates this glow in my hand, I place it back into the pool, where it settles in amongst the snails and seaweed.

The seaweed lines every pool and there are several main types – some grassy hair like stuff, a sort of red lacey type that lines the edges of many of the pools and some others of various sizes. The way the water magnifies the lacey one – calling to attention each little fold and fleck – is lovely. Lovely.

Waves crash on the rocks in front of me and I step back so the water that comes in with that wave doesn’t wash over my feet. The sun sparkles over the surface of the water in front of me and I stretch my arms wide to feel the wind that comes in from that vast unknown world – the above and below – the wind and sea- the salt on the air and the sun in my eyes, warming my bare arms.