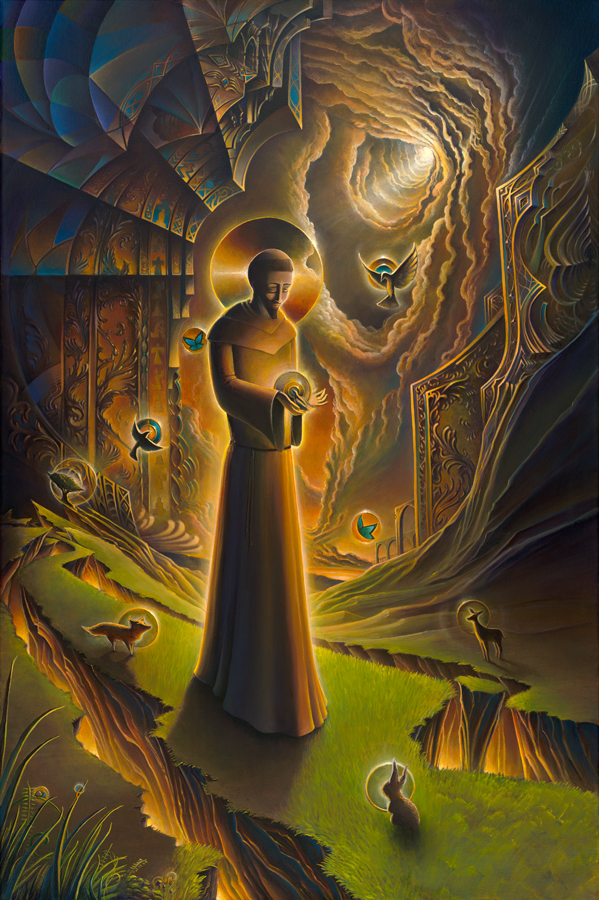 St. Francis – he always seemed to be around when I was growing up. I had a St. Francis nightlight of glowing yellow translucent porcelain. A two foot tall concrete statue of him lived in the garden. He was over our big console TV, as a cross stitch on burlap or something – some coarse material. It was made in the 70s. In that image, St. Francis was walking outside and had a bird in his hand. I remember, too, a rabbit, another bird flying, and a butterfly. The stitching was sparse but there he was.

So he was around – the image and idea of him anyhow. But who was he, to me, growing up? Of all the characters of Christian pantheon – and I heard about plenty, having been raised Roman Catholic – he seemed to be the least mythic and the most human. He was a simple and gentle man, a monk, who loved nature and walked amongst the animals and saw the Divine in all things.

My parents took us hiking a lot. My Dad would comment on how lovely it smelled, how beautiful the trees or the leaves were, the songs of the birds, and we’d drink hot chocolate. My parents delighted in seeing different birds, maybe another occasional animal or the tracks thereof. Family outings had a lot of outdoors to them and a lot of appreciation of nature. We were brought up with a love of nature and a respect for the earth we walked upon.

Later I had my own more personal experiences of that ‘divine in all things’ and it deepened a sense that was planted there at the start.

St. Francis is as close to we get to a ‘pagan’ in Christianity: a lover of the earth. A compassionate friend to ALL things. Someone who took to heart the message in Genesis – of being a steward of the Earth. Being a steward is a humble job. A master has dominion over all things and is at the top of a hierarchy. Humans are not masters of the earth. But they can be stewards… caretakers… Neither high nor low. Just walking the path and taking care – recognizing the divine in all things.

A while back I picked up a book titled The Art of Japan. On the cover there is a painting of Amida Buddha (Amitabha) walking in a similar pose to this St. Francis painting. The image is done in gold leaf on a black background. I saw that painting and I thought about it’s composition – the grace and fluidity – and that a painting of St. Francis like that would be lovely.

Obviously, I diverged far from that original inspiration, as all good inspirations allow us to do. Here St. Francis is one haloed soul amongst many. Every atom would have a halo if it made sense but then I’d end up with merely a painting of golden light. So every living thing – the fox and the deer, the birds and the snails. Even the tree. The grass, too, glows. And he walks through that world – even while it crumbles and burns around him – still seeing the divine in all things and still connecting to the light even in the darkness and chaos. It is up to us, I think, to do our work and do it well with that simple grace. And, really, that work is simply the act of loving. It may come through in the tasks we set ourselves out to do – in the ‘work’ we do. It can be in caring for the critters and creatures and humans in our lives. It is simply to love others – all of them – without prejudice or judgement – to accept that all and everything is the divine and is a part of this grand dance.

I made this painting of St. Francis as a gift to my parents in honor of their 40th anniversary in June, 2014. They loved it. 🙂

If you’d like a print of this painting, you can get one here: TenThousandVisions.com