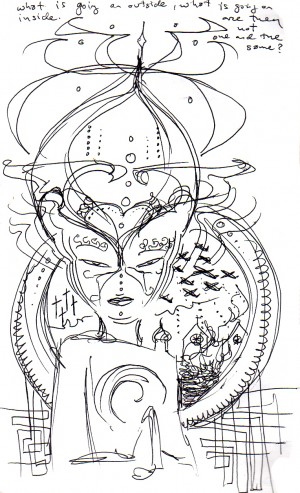 As a kid growing up in the 80’s there was this beast, interspersed between grammar school doldrums and the Transformers, that simmered half a world away and it was called Communism. It threatened to nuke us all if we didn’t nuke it first. Ronald Reagan gave speeches. We hid under our desks or out in the halls to prepare for possible nuclear war. (Like that’d ever help….) This vague threat loomed in every movie we watched and every cartoon – always as some vaguely caricatured Russian or German speaking in terms of “Comrade” and wearing a hat with earflaps because we all knew it was cold in communist Russia and the Commies had to keep their ears warm.

Like a shot in the dark, in 1990,and just before we all sank into the national teen angst of grunge rock, there – plastered across our TV screens – the Berlin Wall, that one barrier between Us and Them, fell. Or, rather, it was knocked out with pick-axes and shovels and bare hands; the result of diplomacy, politics, and changing tides. From the comfort of my living room, at the age of 14, images of people celebrating a newfound sense of freedom flickered across the television screen. This was momentous for them and, for us, a new vague sense emerged: that something had changed and we were all a little more free and could breathe a bit more peacefully knowing that not so many nuclear warheads were trained on us. I’d grown up wanting my MTV just because that’s what MTV told me I wanted. They grew up wanting their MTV because they couldn’t even turn it on when their parents weren’t home. They weren’t allowed it at all. Now they could scream it out loud if they wanted to. Now they had the freedom to voice their opinions and excel at their dreams, should they choose to. With that freedom of choice, we have far more than we realize.

What most of the world’s citizens desire is this basic sense of freedom: to say what they want, when they want, to dream out loud, to buy the jeans they want to buy (should economic freedoms allow), to listen to the music they want to listen to, and enjoy their lives without a sense of threat. Life, liberty, and the pursuit of happiness (without anyone defining what “happiness” ought to be).

20 years later, a new vague threat has emerged (as they do: our minds are always busy creating external threats that mirror our own iniquities). The general populace has been swept up with the Middle East fear. For some, the fear of a black president with a progressive bent is directly related to the Middle East fear. They are afraid he’s Muslim, he’ll kill us all, he’ll impose nasty laws, whatever... But the Middle East: many of these are countries who have lived under 30 or 40 year dictators or some kind of royalty rule that has simply passed from father to son for generations or maybe there’ve been elections but they are so fraught with corruption that they are more like puppet theater than even our own US version of the electoral puppet theater. These are people who have never had a say in government and there are multitudinous restrictions on their freedoms. That said, it’s no surprise that, after a while, the disenchantment and anger comes to a head. While this isn’t the first time that tensions amongst populaces in the Middle East have reached a boiling point, the populace is better educated (many of these countries offer free university schooling), has tools like Facebook and Twitter and, amongst the younger crowds at the very least, are more tolerant of each others differences and stand united in a desire for freedom for everyone and not just a select religion or sect.

The point I’m trying to make here is: it is an innate desire in people t0 desire freedom. They want, at least, to have a sense of general freedom. The uprisings in the news – the bloodiest of which, thus far, is in Libya – are the result of years of oppression that echo the burst of freedom that spread across Hungary, Poland, Germany, and, finally, Russia back in the early 90’s. (Interestingly, Iran and China, while standing with the rest of the world in condemning Kadafi, are quickly squelching the budding fires of dissent that are fomenting in their own countries.) Ultimately, the shift in the Middle East is turning out to be much bloodier and violent than the Eastern European turn 20 years ago but the point is that tides shift and here, again, is a shifting tide.

Here in the good ol’ United States people rant against the government. People rant against health care while taking their Medicaid prescriptions. They rant against environmental laws while savoring their clean air and national parks. They rant against taxes while enjoying their smooth, well-engineered highways. They rant against the fairly elected president. Recently, in Georgia, an elderly man asked his congressman during a Town Hall style meeting “Who is Going to Shoot Obama?”. The congressman, while flustered, moved right along. This elderly man, who is likely on Medicaid, didn’t like Obama’s healthcare program. I’m all for a small government but, unfortunately, humans, while inherently good, can also be inherently greedy and selfish (because they have this belief in the solidity of the Ego). Many of our laws help keep people in check: don’t kill people, don’t steal, don’t dump toxins in the river, etc. Other laws: anti-abortion legislation, the immigration laws of Arizona, etc – these sorts of things impinge upon people’s basic freedoms. Some laws suck and there is power to change them. The thing is: we have the power to do this, however much we cry that we don’t, and we often take for granted, without a shred of gratitude, the beautiful freedoms that we do have.

Some laws are fought down. Some win. We have a history of winning and losing and winning and losing. We have a history of being able to go say what we want, shop at well-stocked grocery stores, fill up our gas tanks, and know that, for the most part, no one will shoot at us or bomb us. No tanks will suddenly come rumbling through our streets. No measles outbreak will tear down our neighbors. The conditions of our lives support the pursuit of our happiness far greater than many because of that basic sense of freedom and basic lack of fear. Far more of the fears that we live with are self-created: economic fears, fear of death, fear of not being loved.

While it’s true that all fear is in the mind and it’s possible to experience mental freedom regardless of whichever regime is in power: it still sucks to be shot at for what you believe whilst living under the eye of a politico who has been in power for 40 some-odd years. It sucks to not be able to follow your dreams, should you choose to. That’s the freedom people desire: the freedom to choose to follow dreams. Many people in the so-called Free World drift away from those dreams but that is their choice. The conditions for realizing the dreams are there: there are ways to start businesses, go to college, travel, be self-propelled, make it happen. It is simply the freedom to choose that most people desire.

I would rather live with working through the little dictator in my head that keeps me from following my dreams than have to live under the thumb of the big dictator ruling my country. I would rather live with working through the basic mental fears – the ones seeded by death and love and desire – than the fear of being shot for disagreeing with my government. Some might call this the middle path: too much intensity and it’s tough to just get down to the basics inside of ourselves. Too much comfort and we never have the impetus to do the inner work.

We are very blessed to have the basic freedoms we’ve been granted. Never shun someone just for wanting those basic freedoms. Maybe you had the freedom to choose what jeans you wore today. You had a hundred different stores you could have gone to and you settled on the pair you are are wearing. Don’t shun someone for not also wanting that freedom. We all know that all sorts of trouble ride on the back of that freedom of choice. Once people have the freedom to sit on the couch with a twelve pack of shitty beer and eat twenty McDonald’s hamburgers, while watching monster trucks crush small cars – well, some will choose that path. Others will grow their food in their gardens. Others will go to school and learn to think. Others will protest injustices. Others will make music. Or paint paintings. Or dance. Or work together to create a better, healthier world. And while we still have to put up a fight sometimes to maintain the right to do any of these things, no one is stopping us from doing so and, as we’ve seen: we win far more than we lose.

I truly hope that all the people pushing for this sense of freedom, for freedoms of election, free speech, freedom of movement, the freedom of choice, can have those dreams realized and live more comfortable lives that allow for deeper growth and higher rewards. All beings want to be happy, free, and awake, and it is the tendency of the human spirit to move towards this light, regardless of oppression. While our own 200-year old democracy has become, in some ways, rather bloated, I look forward to seeing what a fresh start, half a world away, might blossom into.