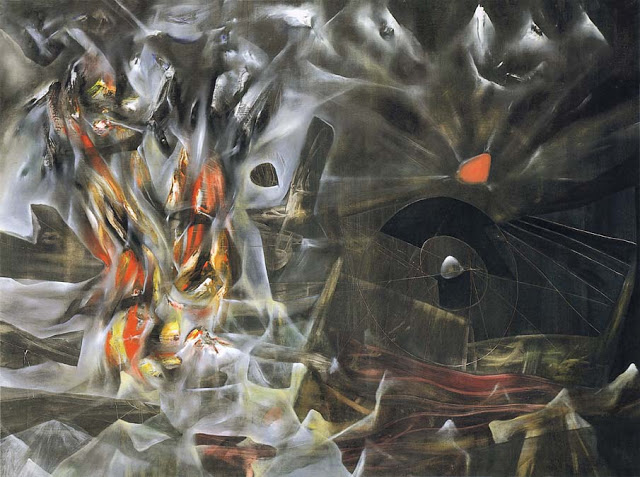 The Disasters of Mysticism - Roberto Matta

“Many painters work so cautiously and meticulously with the primer –and with the execution of the picture – in order to preserve it for eternity – that they lose their flame. And it happens that the painting becomes so tedious and poor that it ends up in a dark attic.”

So what is it to maintain one’s stamina through the course of a painting?

Inspiration strikes so hard sometimes. Like a lightening flash, we have that instant realization of all that it could be. How do we take it from that moment of inception to a point where it is just as detailed and perfect as the lightening strike but also just as viscerally crackling WITHOUT losing the proverbial flame?

For many years prior to Munch, the role of painter was as re-creator of the real, reteller of the myth, rehasher of the still life. One would be hard pressed to find many painters who went at the painting in a enthusiastically manner and decided to leave those brushstrokes. There was a very specific approach to painting and most every painting up til that time was a detailed, refined, vision that, more often than not forwent spontaneity for precision.

Painting had become rote. First you did This. Then this. Then this. A landscape. A still life. A scenic view. A portrait. And so on. Each had it’s own mechanical approach. Successful was the artist who refined each step, laboring every step of the way to capture the fold of a gown, the musculature of a horse, the sweep of a hillside. While the light of a sunset or the reflection of a robe may be perfectly captured, there was sometimes a sense of the present moment – an urgency – that was missing.

(An aside: I believe this is why El Greco – who painted in the late 15 to early 1600s is so note worthy. His artwork, raw and cold, strained and emotional, was far ahead of its time.)

In any case, the artwork of the late 1800s and early 1900s – the Symbolists and Expressionists, Impressionists and Cubists, and so on – eschewed that compartmentalization of form and style. In exchange for careful detail, they wanted to draw forth the emotional life that bubbled just under the surface. This sense of discovery triggered so many artists of that turning of the millennium to seek out new ways of expressing their medium.

At this time, now, to my eyes, while there’s a lot of life, so much of the art DOES look unfinished. As if dabbed on by a drunken hand in the haze of a low lamp, it’s noisy, crowded, and unfocused. These are the early notations of the internal world of the human species making themselves known. You see, it WAS dabbed on by a drunken hand under low lamp. The low lamp was all that people had. Alcoholism has been a demon throughout the lives of artists (Munch checked himself into a hospital to deal with it) and there certainly wasn’t much in the way of Yoga or so many other options we have available to us today.

So, perhaps, Munch was right, for his time – spending too long with the underpainting, the process, the details, takes away from the emotional impact of the work. There would be a visceral impact of YES THIS IS WHAT I MUST PAINT but there wasn’t a lot to help maintain that stamina. As time goes by, according to Munch, the initial fire would subside.

So what IS it to maintain a vision for months on end that, when complete, still has the visceral impact of that initial spark of inspiration?

This is something I work with all the time. The answer is both in the subject of what I decide to paint but also how I take care of myself along the way and how I treat my creative process.

First and foremost, I have to care about what I’m painting. When I decide to create something that I’m going to spend 5 or 6 months on, it has to be a vision, an idea, a thread, that really lights me on fire. It has to be a fire I can draw from for the duration of the piece so that, when I sit back down to it, I still see, not some finished painting, but… lightening.

Obviously there are moments of quietude. There are soft slow valleys. There moments of just ‘work’. It’s not all fires and lightening. Sometimes it’s just a slow simmer. Sometimes I don’t know what exactly to paint next so I go to where the ‘work’ needs to happen. The spaces that need to be filled in. The details that need to be cleared up. It’s a day to day process.

Other days I can attack it with viscerality and passion. You can’t plan for those days. You just have to show up.

Some people who have seen my work note that, while it’s detailed and precise, it still maintains its rhythm and flow. It still has that proverbial lightening.

So here’s some advice on how to counter that languishing that can happen along the way:

First, like I said, you have to find an idea, a vision, that really lights you on fire. It has to get into your core and be something you will regret not painting. You can’t imagine not painting it. It should make you sick when you think about not transcribing it.

Then think about it for months. Go back to it for years. Dwell on it. In it. Turn it inside out. Upside down. See the entire world through the lens of that painting. Every human dream and mortal foible. Eat with it. Drink with it. Dance with it. Live with it until you can’t imagine NOT painting and then, when you finally decide to make it, run with it. Or not – maybe it’s just a flash one day when you look at that one sketch you made three years before and you say A-HA!

Take care, every step of the way. Be sure of your approach, like a pilot touching down with an airplane. Like a surgeon about to make that first cut.

Then run with it.

Maybe ten thousand sketch book doodles. Maybe an ink drawing that pulls it all together. Maybe a dream. Gesso the canvas at least twice, sanding in between. Remember: you’re bringing forth a goddamned diamond so take care with that. Then a background layer of just raw color maybe of these three colors with a little extra brushwork right here in this corner. Or maybe not. Then draw your image on with chalk. Look at it the next day, wipe it off. Redraw it. Then draw it again. Then, finally, the paint. Slowly. Sit down. Wait for it. Stand and attack. Sit. Rise again, patiently render that one fold because this one fold is patiently and sensuously woven through the soft interweavings of our lives. Then that corner, ah it’s a sharp feel-it in the heart kind of corner. And then, wait, sit, what’s that, breathe… Then, that part, it’s a magic curve of, I don’t know, whatever you’re feeling, just rush through it. You’ll go over it again and again. And each time, you’re just drilling deeper into that feeling, that moment, that sensation.

See, this is the dance and the more you dance that dance, the better you get at it. As time goes by, you won’t have to second guess your movements, your steps. You’ll sit back in your Comfy Chair (because every good art studio has a Comfy Chair that faces the painting) and wait for the moment to arise. Because the moment will be there sooner than you realize.

And so we keep at it. For months. For years. For a lifetime.

Because, for myself, when it comes to the next painting I’m going to make, I can’t imagine the world without it. It could be my own grandiose sense of self-importance. Or it could simply be the story that this human is telling. This too is part of the fire and something we, as artists, have to own.

But life: life goes on around us. Stamina is drawn not just from the initial creative fire but from the sustained force of our own lives. How do we sustain that force?

I eat reasonably healthily. I drink a lot of tea. Not a lot of coffee. Yoga and exercise. A lot of out door time. And showing up in front of my easel every day at the same time.

Those are a few things that have helped me create a more sustained momentum. Sustainability is, in a sense, a buzzword these days. But many years ago I realized I need to create a more sustained approach to my creative flow. What I wanted, more than anything, was the ever expanding (and expansive) center rather than a sense of getting from here to there. I learned, along the way, to care for each corner and give each moment its space. I learned to breath with the whole vision.

I don’t like everything I paint. And I don’t feel joy every moment that I’m painting. Some paintings are especially difficult to create. But all of these things that I’ve described are indelibly imprinted on my creative process and so help drive me, inspire me, through those difficult moments.

To be an artist is to live with the raw visceralness of life in a way that few others contend with. But every artist, no matter how successful, dance with it. Those who are successful find ways to weave together the visceral and the precision, business and lifestyle. Each, however, does it in their own way and we are left, more often than not, on our own, wending our way through the wilderness that is our own personal vision.