The Apotheosis of Hope 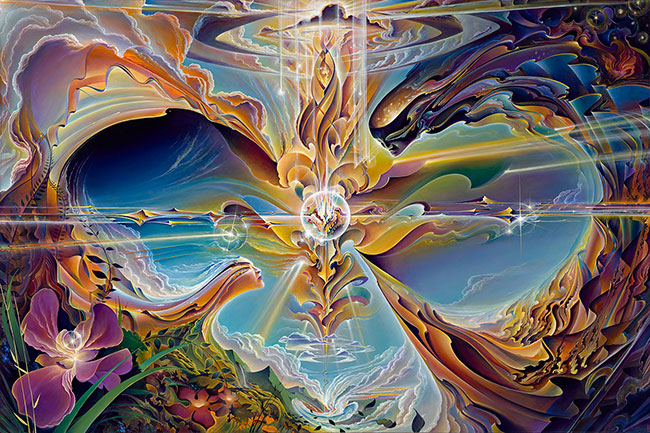 The Apotheosis of Hope- Michael Divine

It is a silly thing – a frivolous thing. Hope is the breath of a bubble waiting to burst.

In the midst of our more confidently brazen facades, we scoff it off as naive – a thing for children’s stories and religious tales when the fairy godmother might come and sweep us away and the brethren hope for the return of their savior.

When all is well, what need have we for hope? When tomorrow and the next look as bright and full of possibility as today what need have we to break our stride? I’m ok. You’re ok. Everything is grand. Everything is ok. Our needs are met and our systems intact and life provides because life will always and forever provide in as abundant a manner as now – or so we believe – what need have we then for hope? It is, in those times, when earlier moments of want are forgotten, that hope turns into it’s own ego reflection and becomes ‘expectation’.

Hope is that fleeting moment – that briefest of uplifts – before the story kicks in. The story of “what I want or need”. Or what I believe it should be. What I think should happen next. And how we will feel or want to feel when it all works out like we expect it to.

Every archetype has its counterbalance. Discernment becomes judgement. Joy can turn to hubris. And so on.

But hope.
We are talking about Hope.

When we awaken in the morning and it’s another day and the news bombards us with more vicious attacks and security outrages, political upheavals, and vomitous personality flaws, and the bills in a stack that need to be paid sit in unopened envelopes while I scoff down another breakfast and that one blood relative that just needs a break or a chance or something anything is still calling and I haven’t been paid and more stuff and dramas and dead weights and the kids or the cats or the car, maybe it’s the dog, there’s the old scars prickled with new scabs. It’s then when dreams seem so far away buried on some distant horizon blanketed in grey and the expectation of the day to day becomes a breadcrumb trail leading away from better times because now these days are the only days. It is then.

It is then, too, that hope seems a trivial thing. For what is there to hope for when yesterday’s trials just get worse today and the next looks to be about the same and rather than healing all wounds, time just continues to grind away? Every dream becomes dust. Your sweet reflection rusts.

Why hope? Why hope at all?

Hope is the barest flicker of a candle flame in the middle between believing and not believing in the next gracious moment.

Remember when it was the pyre of all our desires burning in an ever lasting blaze? Everything – with or without name – all thrown in at once – won’t need that again! – burning burning – everything just burning away. We were dawn’s new day ever-lasting to become the sun as if we were only and ever the first greatest golden one and this is the end forever and ever and in the midst of playing that last note, that last chord, that last song we would ever hear and could possibly hear for once there will be peace on this earth world without end name without name flame within flame – has anything ever looked sounded seemed so clear…

And then.
And then.

Comes the darker hour of night.
Comes that moment after losing sight.

Mind chewing away on all the could have beens should have beens maybe why why did I even think – even consider – even entertain for a moment’s breath – I could touch that sky? Let alone – fly?

When everything – and I mean everything – the leaking pipe, the traffic light, the unopened envelopes, the endless parade of tirades, the places I’m powerless – the bottom’s dropped out – the cries of a billion starving mouths with nowhere to sleep, the still-boxed dreams that could have been – all whispering and whimpering amongst themselves, screaming and shouting and crying out loud:

Where have you been all this time. You’ll never make it. You don’t even know where to begin. Won’t you help me?

That candle flickers inside, casting a light, a glimpse – I’m still here. We’re still here. It’s ok. We’re ok. It’s going to be ok. One foot in front of the other. I hope there’s still a floor!

If I could be one dream. One whisper. One song. One being. Still banging that drum, ringing that bell, dreaming that dream. Singing that song and pulling myself apart at the seams… for you. For them. For us. For everything. Just to inspire the belief that there can be more than that and more than this because there is only this and forever this. And whatever we choose make of it.

If you are that one only soul remaining – that one candle flame flickering – that one tiny breath. That whisper. That whimper. That one soul still left dancing… If you can be that and inspire that feeling in another – that sensation – or reflection – that is hope. It is the hope that we are growing towards better days and the best is not behind us.

It is the driving force that says: Grow. Survive. Thrive. There might be another day. There might be a better day. But if we don’t LIVE in this one we’ll never make it to the next. If we don’t build towards that possible future now, then what do we have? Life begets life. Breath becomes breath.

If you see me crawling alone on the side of the street, destitute and wondering if this asphalt is the only thing that has ever been – I am only human – toss a crumb – a smile, a coin, it’s truly all the same – in my direction because you never know if what to you is the mere faintest of distractions might actually save a life, a soul, a spirit in need of resurrection, maybe just a human reflecting humanity in need of connection.

See, if I can be just one whisper, one underlying tone – one breeze upon the nape of your neck making you feel a little less alone, that taste that still lingers on the tip of your tongue reminding you of songs yet to be sung or that memory of a dance so good now long gone, that recollection of a time so serene, so magic, so visceral, so real or that possibility of what could be – it hasn’t even happened yet – if I could be that future – if I could be that

Hope
for you
That it could be
Again
I will.

Hope.
The intimation of the greatest of pasts and futures in the now.

Hope.
It is the song that sings: we have yet to hear the final note. Hope keeps it’s money in the game. Hope strategizes moves and sees me completing actions beyond which my tiny mind can even comprehend. And I – my mind – this heart – we are only messengers of hope – of life – of love and laughter and soft sweet surrenders for all whose candles flicker, whose wells run dry because they do sometimes.

Hope is the effulgent light of our mystical hearts and the great human potential of all we could be. It is that well spring of eternal devotion that we direct ourselves towards – a notion that is as close to beyond our imaginations as we can comprehend. It is all of the everything at once. It is the sky folding into the earth and back again and our place in that as one more beautiful and intricate cog of a machine whose only true goal is beauty, life, death, entropy, all of it at once. It is mind no mind. It is a verse of the song of this infinite dance.

And it is hope that, even in the most trying of times – in the darkest of your moments – which may not be as dark as those of some but, still, may be darker than others – everything has its day and everything has its night – the darkest night hopes for the brightest light and the brightest light hopes for the darkness of night – it is hope that keeps us alive.

Hope says, “We will meet again.”
May you remember hope.