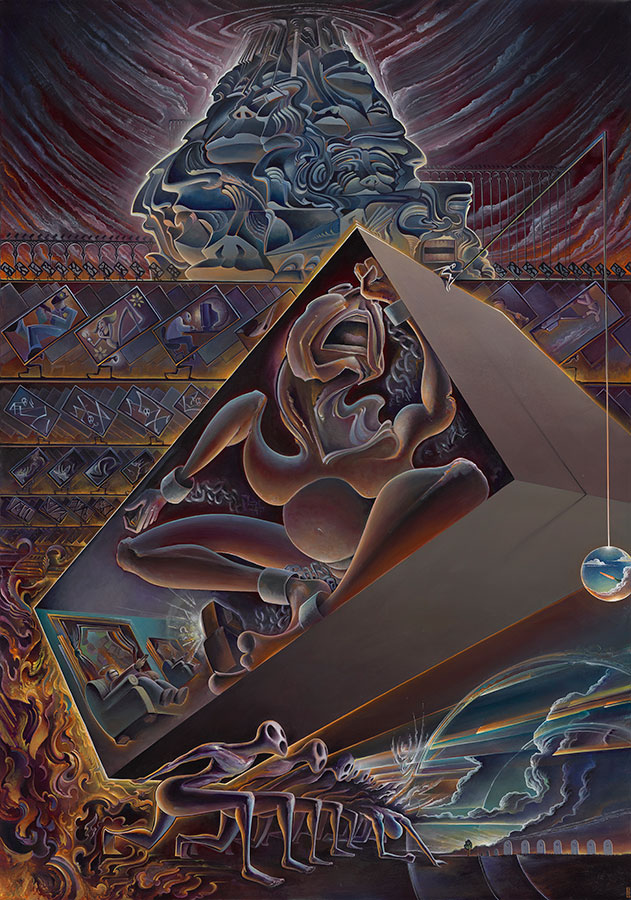 Every painting I make is this months-long meditation on an idea or melody or a feeling. Each moment and movement – every visual motif and swath of color – is a thread that should be relative to the overall storyline. In some paintings, like Only Love Can, the threads lead to the highest most beautiful moment I can feel that has ever been felt (within the boundaries of the vision). The painting becomes this ever rising aria of light and beauty and love and joy and, ultimately, it’s wonderful to paint.

Every time I pick up that brush again for the current painting I’m working, I step into this river of emotions and sensations that I’m directing to the most perfect vision of the vision on the easel that I can imagine, no matter how I personally feel. If I’m depressed or sullen and the painting is to be a thing, it’s just the work to be done. In those times. it’s a good and nourishing meditation. When it’s a painting of unfolding beauty, it’s like the unwrapping of a precious jewel reflecting perfect light.

This painting thought – The Bricklayer’s Dream – this is despair and loneliness and the drudgery of the machine, the disconnect, the looming weight of the existential void. There is no happy ending here. There is no sweet surrender. It is man’s subjugation of man. It is imprisonment by belief systems and identity. It’s ignorance and death. It’s the multitudes just trying to eke out a little happiness in their little corner of the world while they toil away – building value for someone else’s tower all their lives – through patchwork suburbs and apartment blocks – hives and anthills – over and over again through decades, centuries, generations, lifetimes.

So every line speaks to and of those burdens and has to be painted from the place of feeling those sensations. Each burdensome part harmonizes with the melody of the whole as a necessary function of the painting, no matter how chaotic or disharmonious or downtrodden each of those parts may be.

Yet, I’ve always believed that if I don’t feel it, I’m just faking it and I can’t fake it. I can’t disentangle my own core self from the expression, because then it’s not authentic. It’s not real. It’s not art.

Every time I’ve picked up the brush to work on this painting has been to open myself up to that facet of the human experience again. And even if we’re partying on the lip of the precipice of the next blissful sunrise, welcoming the sum total of all that is good in the world, I can’t shake this feeling of all those souls for whom there isn’t much hope, the millions who make each moment – THAT moment – possible, the people stuck in that machine with little latitude or opportunity until death do us part and buried under the same dirt.

I had the idea for this painting 21 years ago when I, myself, was 21. I had this sort of vision – sweeping over hillsides, across neat little squared off suburbs and block by block apartment buildings. There were all these little bricks built around this human existence forcing us along these roads, these paths. And inside each brick a little person toiled away, building value for someone else’s tower. And the joke of it: it’s all just belief systems keeping it in place.

As time passed, the narrative continued to evolve: it wasn’t just the tower of capital, it was religions and governments and identities, building the ever changing face that is never finished because every generation has a new idea, a new approach, the same old game – yet we break our backs. It was the multitudes.

Then, something like 15 years later after that initial idea, I was in Las Vegas and there was this conjunction of shapes and forms where an what looks to be an aquaduct spans overhead towards Cesar’s Palace while there’s this little gold thai buddhist stupa down below. And again, the ideas of money and power and perpetual slavery came together and I was granted another passing moment of this vision and it came a little clearer.

We were in Luxor and Ankor Wat and Tikal. We saw vast murals, stone carvings,  whole walls illustrated with epic stories of laborers and warriors toiling away for some god, some king, some idea, forgotten now, in the past. We were in the filthy streets of San Francisco literally teeming with the destitute butting up against the heels of the next great digital age. Throughout all of this, I’ve been narrowing in on the composition and structure, the narrative and its focus because this is a story of the human condition.

It was 6 years ago at Burning Man, dancing out on the playa to techno and a dusty Thursday morning sunrise that I came up with a title.

Then I realized two years ago that it actually needs to be three separate paintings and that The Bricklayer’s Dream is the first and the title I came up at Burning Man with is title of the second piece. I made the final drawing for this painting 2 years ago. In that interim time, we went to Australia and back. We moved into our current home. I painted The Apotheosis of Hope, Only Love Can, and A Transitive Nightfall of Diamonds, amongst others – these big exuberant blissful paintings. Meanwhile, in the background and throughout every other painting, these ideas have been churning away, waiting. As I read the news and ponder our Late Stage Capitalism world, I keep thinking about these structures, these towers, and the value we build for others.

They were all leading up to this, creating a space within myself that I could feel safe dissolving into. I can look at the other paintings and say to myself – “See? You’ve got that in you, too.”

So it took me 22 years to get to the point where I was ready mentally to tackle this painting. I’ve spent years assessing and reassessing the idea, seeing it reflected in from Luxor to Ankor Wat to Tikal to the filthy streets of San Francisco that butt up against the steps of the next great digital age, while I’ve narrowed in on the composition and structure, the narrative and its focus.

This wasn’t a fun painting to paint. It didn’t leave me wanting more. I made it because it seems it needs to get made. And the next one will be made as well. It’s what I hear and see in the world and it’s the right time to finally paint it. Meanwhile, as I watch our world go through all the pains it’s suffers, I too sometimes feel like one more lonely soul trudging along with my brick, looking for a shred of light, trying to be optimistic, knowing that this too will pass… this too will pass.