The Magic of the Flow 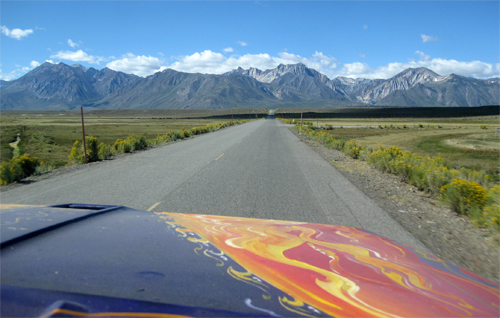 We were on our way to Black Rock City, that visionary oasis in the Nevada desert, riding in this bus that I’d painted over summer. Driving up the 395, forty miles north of Bishop, past the sierra peaks of Mt. Whitney and other big craggy mountains, the road starts to climb up over the pass. At some point the radiator over heated and a crack that had been fixed opened up and we pulled over to the side of the road. Waited a while and this grizzled looking repair guy shows up. He took a look at it and suggested we come to the camp where he lives where he said hed fix us up. We all looked at each othera, wondering what that might entail.

So we coasted back down the mountain and turned off the highway into the grassy expanse of the Owens Valley. We parked the bus next to a snaking river and had the whole range of the sierras as our view. Not such a bad detour, all things considered. The folks were suer excited about the bus- what a psychedelic wonder!

The day passed. Nightime arrived and, in the cold wind, James, our repairman, showed back up and went at it on the engine. I fell asleep and, latean the others went and hung out with james, his wife, and some others.

Morning sunrise on the mountains, the grass a golden green, the twisting river a deep blue… Things were progressing along. Brown’s Owen River campground was a sweet stay. While we had intended to be on the playa early, this diversion wasn’t so bad.

Now, with the engine running, we are back on the road, on our way to the Black Rock City.