The Small Figures in My Work 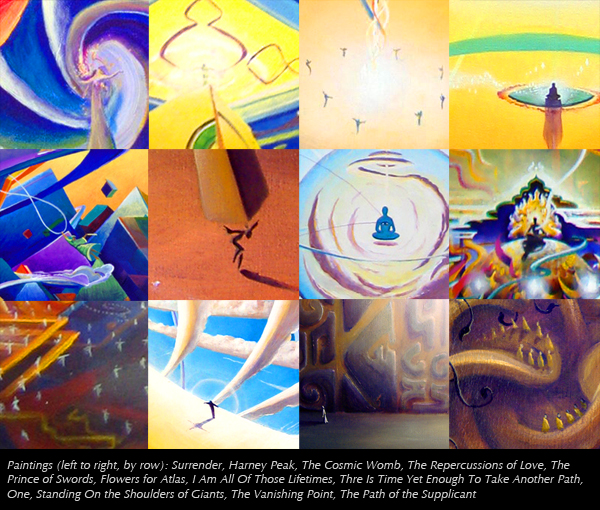 Using my smallest brush I painted a small figure standing atop a flame, holding onto some sort of physical structure like an axis with 45 degree angles. The figure is checking out the view from up there, so to speak. It’s a pretty far out view but not a very big canvas. The very tiny person up there  – really just a silhouette with perfect little curves – was painted with my tiniest brush: a #0 Kolinsky long handled brush, a lovely brush, really. I’m afraid I’ve almost worn it out.

As I placed the faintest of dashes to suggest a left hand, I thought about my habit of painting very tiny people into my paintings. I always paint them not in relation necessarily to the canvas itself but, instead, in relation to the smallest brush I have and in relation to the largest thing going on in the peice. I want them to be small. The painting, no matter the size, usually has similar sized small figures. They are always making the canvas seem huge because our eyes pick out the shape of the figure in it and relate then to that shape. It is sort of in the same way the we anthropomorphize all kinds of objects, placing emotions, etc, upon them. We see the shape of a person and we relate to that shape and then relate to the rest of the image in terms of that figure. With the paintings that have these tiny painted figures I want to create the greatest sense of space with them: a sense of grandeur and depth maybe; a sense of approaching the infinite and, really, being very small in that view.

The first painting I think I ever did like that is perhaps the oldest of all the paintings that I have a record of. The painting, titled Surrender, has a small figure atop a mountain, realizing he is a speck in comparison to the divine. There are all sorts of paintings that followed and not all of them have a main character, so to speak, but those that do often have a very small main character. Maybe it is me, experiencing a freckle on the little pinky toe of the divine. Compared to that pinky toe I am a speck but, in my enlarged versions anyhow, I am at least a quarter inch tall, an estimable height, perhaps, but, comparatively, a mere trifle in comparison to the forty eight inch tall painting.

I like it like that though. I wouldn’t paint the figure any bigger for two reasons. One is that I’d have to paint details on to the figure – a pair of pants maybe, some shoes. If I were to do that then Mind would have all the more reason to either relate or not relate to the figure. “O,” one’s mind might say, “I wouldn’t wear a red shirt, that is certainly not me.” or “My hair is long and that figure’s hair is short” or something like that. These statements are, generally, a little more subconscious than that but the point is – by choosing how we can’t relate to something, we give ourselves an exit from the experience. By making the figure tiny and with few, if any, distinguishable characteristics – their gender even – the character is all the more universal.

The second reason for the tiny figure is that a bigger figure would, I believe, have more dominance in the composition than the experience of whatever is going on. I’m not so interested in painting the expressions of the figure, gestures, etc, unless that is what the painting is about. The expressions and emotions of the figure are, likely, already captured (or attempted to be anyways) by the subject of the painting. That is what the piece is about, not the reaction of the figure. The reason the figure is in there is to give the main subject of the painting a bit of relativity.

Essentially, I want YOU to experience whatever the figure might be experiencing. Whether it is in the outstretched arms wide open big sky feeling of Standing on the Shoulders of Giants or the sense of casting off the weight of the world in Flowers for Atlas. The subtle gestures and forms of the figure in relation to the grander piece suggest an emotional, psychological or spiritual state of the figure and, thus, pass this on to the viewer.

We walk around all the times with our heads so big and full of ideas, however grand or however trivial, in a world that is, generally, built in direct proportion to our bodies and our senses of self. When we pull ourselves out of that world and experience something like a mountain ledge in the Tetons with some kind of epic view and a tower of a mountain behind us, or thunderheads and a  sunset across the Great Plains or stand upon the rim of the Grand Canyon, we realize, we get a sense, of our true proportions – a speck – a mere punctuation mark in the grand book of the universe! I would say that I paint these small figures to remind myself of this as much as share the feeling or sense with others. We’ve all been there, at some point or another, and we get so wrapped up in “our worlds” that it’s good to be reminded of it sometimes.