The Spectre of Self-Doubt 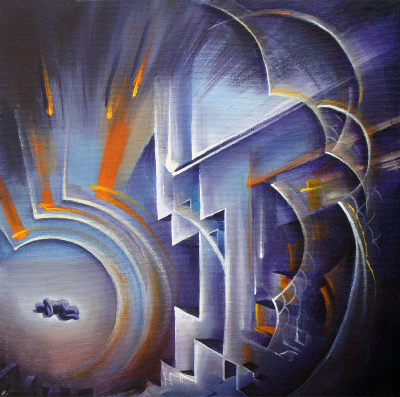 Self-Doubt is a mask worn over the mask of Self-Destruction that is worn, ultimately, by Fear.  Self-doubt: I-don’t-know-if-i’m-good-enough. It’s a mask that says: maybe I should never have started. Self-doubt says: am i – is it – will it be ever be good enough? Do I actually suck and no one is telling me? Even when they congratulate me and pat me on the back? Even then? Will I ever make it? Am I ever good enough?

The Wright Brothers: for some reason or another they come to mind. Two guys trying to fly a plane – to lift this thing off the ground. I’m sure they heard more “You’ll never make it” than “I believe in you.” So they worked daily on believing in themselves. In the end, though, math doesn’t lie and their math was, in the end, sound. So they succeeded.

There are the more abstract worlds, though, that some of us choose to live in that doesn’t seem to appeal to ordinary mathematics. Myself, I decided to be an artist. As an artist, a painter, I use a stick with a bunch of hair glued to the end to push and pull colored pigments suspended in a polymer medium around a surface of woven cotton covered with a hardened chalk substance. Granted, the stick is rather finely crafted, the hairs are supremely smooth and supple, and the “paint” is luxuriously smooth and homogeneously mixed. I might be using it to create a scene expressing the intensity of living. I am using it to illuminate a vision of my mind. I am exploring the verdant valleys of my soul and how it relates to the world around me.

But then self-doubt comes creeping in.

When self-doubt arrives, everyone else looks so sure of themselves, so confident. When self-doubt makes itself at home, every glitch in the system looks like a five-lane highway. When self-doubt is there to stay, nothing will ever get done and things crumble.

Self-destruction is the ruler of Self-Doubt, which is just one more minion of small ‘s’ self which is built on a foundation of fear – fear of it’s own demise. Big ‘S’ Self knows better but depending on how much time we give it versus small ‘s’ self, depends on how much we will listen to it. Self-Destruction, that wily bastard, is happy to start chipping away at our masterpiece which is, ultimately, the perfected Self.

Like every one else in the world, I sometimes crumble.

Just as an investor earns returns on his investment, so there are returns on the work we create. When the people like it, we rejoice in their rejoicing. When the critics like it, we rejoice. Yet, if one in 99 critics doesn’t like it, we linger over the words of that one. We see all other words as just placation – mere salve for a wound – while the words of the critic sting and we take them personally. The others: oh, they satisfy ‘ego’, we tell ourselves in our too-spiritual monologue. Don’t get wrapped up in that, we tell ourselves with little ‘s’ self wearing the cloaks of our teachers, our saviors. Why don’t we allow ourselves (ourSelves) to just understand that we are doing something right?

It can be so very difficult sometimes to allow for that. You are on the right path. You are ferreting out the proper vision. This is the message that life returns back to us in various coincidences and syncopations and gifts – like echoes of our actions. And yet, that little ‘s’ self would like very much if we didn’t hear it so it pulls out the magnifying glass to examine the criticism and shoves aside the praise. We’re trying to destroy our ego, it says, don’t listen to that bullshit pat-on-the-back praise.

Sometimes, those 99 positive reviews and the 1 negative review are just the voices in our heads. Like an old-time operating room with an entire audience reviewing our every move, our work is on display for every voice – every face we’ve ever known – to judge it.

Some will love it. But, says the voice of self-doubt, they always love what we do. We can’t do any wrong in their eyes, so what’s the use in even bothering with them?

Some will merely like it. We’re always trying to please them just a little bit more. Really we just want their love but we are fine with the ‘like’. Fuck those people, says little ‘s’ self.

Some will neither like nor dislike. We really only wanted their attention if their attention was positive. Really, we hate it when we don’t get any attention for the blood and tears we grind up to create this.

Some will not like what we have done at all but will not be passionate about it or have a reason. To each their own, we say, those people never had any conviction to begin with.

Some will very much dislike it. For obvious reasons! we cry, our flaws are so apparent! It’s not good enough. It never was. Why are they so dead-set against it? Their opinion will, sadly, matter the most to us because it saps at our joy. Their confidence erodes our own.

And, with that, Self-doubt will slowly but surely, if we allow it, undermine our defenses against Self-Destruction. If we run that race, we’ll end up with all the others: living up to the potential that the biggest doubter set up for us. We will always be trying to create Good Enough or Next Best or Good Try when all we really want and desire are the masterpieces that we know are in there.

We set up the paradigm at a young age. Whether we wanted to or not, we wanted to please others, most notably, from the start, our parents. We found that if we pleased other humans they showed us Love. We weren’t sure what that was exactly, but it had to do with a sparkle in the eye and a tone of voice and a sense of belonging and openness.

Later we went to school and met others. There was something similar in that sense of belonging, that Love. That sense of confidence overflowed into the things we created.

Somewhere along the line someone who wasn’t so caring (or to whom it was similarly said) declared: “You did it all wrong.”  Their tone of voice threw us off. The look in their eyes made us feel ‘outside’. Even though we had friends, family, everything, one person was able to snatch it all away. As time went by, it was one more and one more and one more until we learned that some liked what we made and some would not. What no one told us was that many of those who ‘liked’ us merely did so because they too wanted to be loved. It was merely an exchange and, deeper down, they too were afraid of not being loved. That fear was self-doubt; it was the shadow beneath the twinkle in the eye that said ‘I like you! Let’s be Friends!’

How do we nurture the inner fire that burns on and on? The inner fire: soft, holy, sacred. This inner fire: driving, focused, and divine. It knows very clearly what it is and what it wants. Ego gets in the way. Little ‘s’ self gets in the way. But ego can provide support, when it feels like playing along. We’ll all throw logs on that fire when it’s warmth feels so good. We’ll all throw fertilizer under that tree when it’s fruits are so sweet!

So why, even when the fruits of our work are sweet, why do we doubt ourselves?

The guards at the gate of our mind cower, listening to a song that got played over and over – have ye but faith in ME then you might succeed. But WHO?! Goddamit!

Why, in all my years of school, of church, of being a valid citizen, did they never teach me to have faith in myself? Because, I was told, I am a sinner from the start, a miscreant in the making, a criminal because I chose to do things that they labeled crimes. And, thusly, I could never be trusted to make the right choice. After all, no one else trusts themselves to make the right choice.

When I gave up all that to go be an artist, the echoes remained. The driving passion behind my brush and in my actions pushed me into lovely, beautiful spaces. It brought me to epic peaks and cascades of wonder and sublime sensuality and they were all experiences that existed while holding a paintbrush, facing a canvas, pushing around that pigment suspended in polymer and, because I’d focused and focused and focused, and driven myself past every voice, and forced the most high conclusion, I found great light. And each piece has explored depths and risen to heights that I can only wonder at.

Self-doubt will challenge every path at every step of the way. My path is Painting. It is Making Art. When I step back and look at what I have created – a raw expression of myself – it is no wonder, I say, that I feel the barbs of criticism more than the salve of compliments. The salve is not necessary. I already feel good. The barbs however, they sting. And when I stand before my blank canvas or work on it while it’s in the throes of not-done-yet, those barbs pull a bit. But I pull against them. They tear out. I push further and find, again and again, that which I was aiming for and that much more death of little ‘s’ self.

Belief in yourself, in who you are, and in your deep raw talents that manifest themselves through that thing that is undoubtedly your Life’s Path, is what will drive you to fulfill your dreams and goals. This is not about ambition. Ambition is being rising above – it is about Self and Other. This is merely about Great Success. The Great Success is Life.

May you reach every Great Success.

May you achieve your Most Highest Goals.
May you experience Love without boundaries.