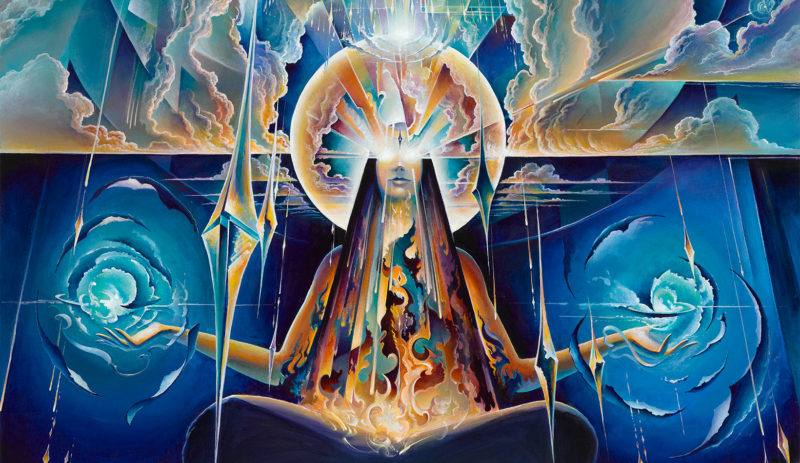 Only Love Can (Reign Over Me) - Michael Divine

There are several essays available online exploring the question of what constitutes “visionary art” (Here is one by Lawrence Caruna and here is another by Alex Grey). For the sake of our discussion here, I’ll add an abbreviated definition so we can have a point of departure for the conversation to follow and the topic I explore in this essay: the WHY of Visionary Art – why do the artists who undertake this style feel it worthwhile and what place might it serve in the world.

What is visionary art?

Visionary art is, I think, an approach to creative work that reflects personal archetypal experiences of the world at large. This reflection couples – and this is incredibly important and vital – the artist’s own inner world and its dynamic interplay of emotions, archetypes, spiritual understandings with a broader world view exploring a particular idea or experience. It is neither a painting of a thing or simply the absolute abstraction to a point where ideas no longer apply. Instead, the best works of this type are a marriage of both inner and outer, the real and the abstract, the surreal, the mystical, and the dreamlike. This interplay can create or invoke a sensation that, when successful, is like a wordless dialogue between the inner formless world of the viewer and the inner formless world of the artist. The artist shares a vision – and idea – a perspective – of the world, their place in the world, and their understanding, in a sense, of where we as humans are or aspire to be in that equation.

Why now? WHY visionary art?

Every epoch asks, I think, the same questions: who are we? why are we here? where are we going? Every age of art has dialogued with these questions using the means and ideas of the time. The artists of the Renaissance responded, after a fashion, saying ‘we are three dimensional beings, caught in time and space, arrived at from various perspectives, and telling these stories that mirror our archetypal struggles.’ Which is to say: the art was exploring various shifts in perspective (visual perspective in art was pretty much non-existent before that time) and using that perspective to illustrate the stories that we’d been telling ourselves over and over again. As we trace the history of art, we can see various ideas evolving over that span of time.

Fast forward to the early 1900s and we see another major shift in creative approaches when artists, freed from the bonds of story-telling and reality-mirroring – both by the burgeoning industrialism-fueled upper class and the advent of the camera – dove headlong into entirely new and different approaches to art that began with studies in how we see – a la Expressionism, Impressionism, Cubism, and Futurism – to the explorations of the inner world – Surrealism, Abstract art, Minimalism, and so on.

While there’s a significant contingent of contemporary creatives that have continued to rehash the ideas already laid out by countless abstract artists that have preceded them and another equally significant contingent that reformulates the ideas of abstractionism while adding elements of our current zeitgeists and visual narratives (the digital, the glitched, and so on), there’s an entirely other school of thought that has run with the progressive idea seeded originally by Kandinsky and Dali and Max Ernst that, between the strict cultural narratives and their absolute dismantling to the point of meaninglessness, between the realist representations of reality and the abstract line and form studies, between the base and the utterly mystical, between the painterly and the graphic representation there is a point – an idea – a state worth exploring – that seems, when given the proper time and space, to offer a suggestion of who we are and/or who we can be – as people, as cultures, as momentums and the results of those explorations offer a kind of signpost or mirror or point of contemplation for the state of humanity at large.

On the microcosmic, the artists who bend themselves to this task, tend towards very personal explorations that result in pieces that are as much product as process, following the threads and lines and forms of the conscious, subconscious, and superconscious – internally and externally – to the most ultimate vision they can possibly express. The resultant piece, offered to the world – and at its most successful – hits a nerve as a point of reflection (“reflextion”) in those who see it – as one can find in the copious responses of those who have taken the time to contemplate them.

It our era of pop culture icons and watered down entertainment, it is easy to dismiss such paintings as these as too complex, that they linger too long in the forms and the layers – for surely the artist could have said the same thing in fewer lines, color, shapes. Who has the time anyways for contemplation?

But a great work takes all the time it needs to arrive at a worthwhile conclusion and to dismiss a piece as such is to discount both the reasons for the creator’s investment in those explorations. The works that we are talking of tend towards a kind of holographic relationship amongst the parts within the image. Each part is relative to each other part and, in it’s finest moments, no part can be discarded without dismantling the whole. Each element, like the finest of stitching, require a certain care and craftsmanship that lets one experience of the whole – like experiencing all of the movements of a symphony – allowing the true transmission of the ideas within the piece.

Why should it worth exploring?

These paintings tend to be explorations of some facet of this human experience. This is a necessarily spiritual or mystical exploration because, at that place where we lose ourselves, at that point where words no longer have meaning, we merge with something wholly other and yet, wholly ourselves. In this process, we are dialoguing about an experience of a part of our reality that simply ISN’T – that isn’t tangible thing or object and has no words or direct sensations to describe it even if we have ideas and words that can suggest it such as joy or grief or agony or awakening.

While there’s obvious abstraction within the work that method alone doesn’t provide enough dialogue – enough points of departure – with the internal world. Instead, each piece becomes an exploration of a mood or a perspective with just enough points of departure to draw the viewer along on the visual journey. These pieces are meditations on an idea. They are a song an artist plays over and over as they steer the piece to the ultimate most final conclusion they can possibly muster.

This is the whole journey of the visionary artwork. Such works use some known concept of our human experience as a point of departure and, at their best, they travel a clear path through various facets of that experience to the highest and noblest aims they can possibly surmise. The most authentic of these pieces strip away the ‘trying to express’ and simply find the sweet spot between the representation and expression of the thing and the actual experience itself.

What value does this have in the world?

The reason this is of value to the world is that our stories are constantly evolving. Our ideas of who we are and what we are doing here have shifted dramatically over centuries. No longer does the bulk of humanity believe themselves to be living on a flat disk at the center of our universe, placed there by some benevolent creator dictator, and so on. Our understanding of our nations, our races, our borders, and our socio-cultural myths continue to shift dramatically. Even more importantly, we have, over the past several decades, been constantly reassessing our understandings of our physiological beings at the cellular, microscopic, and atomic and subatomic levels. Our relationship to the world has constantly been changing too – from our relationship to and our understanding of our impact on the environment to our relationships with this (still relatively new) digital world. We can add to this a quickening of the media and advertising machine that seems to know our every step and which ad to play and when.

It’s exhilarating and maddening and, it seems, leaves little time for contemplation. It is our arts which ask: who are WE in this?

This is the conversation that, at it’s very least, Visionary Art attempts to engage with and, at it’s best, can be – if not an answer – perhaps a signpost, a roadmap, a light along a road which can, at times, seem dark and troublesome.

So we return to the question: why Visionary Art?

Visionary Art speaks to a part of this human experience in a way that nothing else does or can. The best works in this style will last far into the future, celebrated as grand achievements and grand visions of our human potential and this experiment known as humanity.

The responses from the public – across social media feeds and elsewhere – often say something akin to the fact that the artist has painted or created a thing that the viewer feels, senses, or has desired to be or see. In this way, this kind of art becomes a part of our human dialogue that no one else is having, filling a void that no one else is speaking to. It dialogues to our highest human ideals and the varied layers of self that desire communication but, in our current cultures, don’t have words or myths or, at times, even a voice.

We are constantly telling ourselves new stories of who we are and why we are here. These stories strip away the walls of the politics of identity, intermingling symbols and motifs, color spectrums and patternings from around the world without any one or the other being more important than another. Nurtured by the vast amount of information available at our fingertips and the growing sense that borders are merely arbitrary lines in the sand, this kind of globalized and democratized pastiche from which something altogether new has arisen, offers a broad vision of humanity, of where we are going, and why we are here in a way that has never been seen before on this planet.